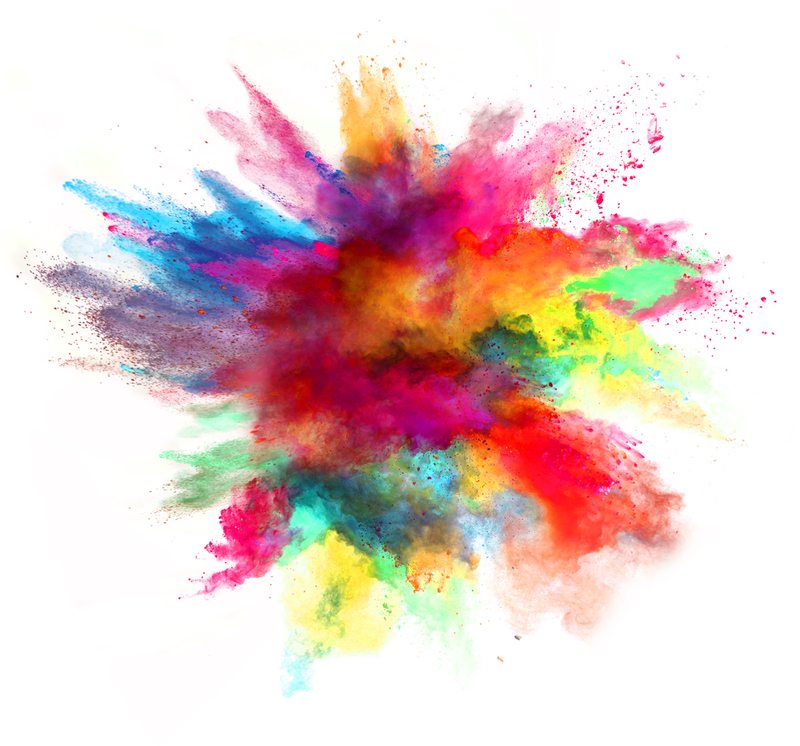 Thanks to the digital era we live in, every colour in the spectrum is at our fingertips.

You can choose from hundreds of swatches at hardware stores, leaf through endless pages of Pantone books, or fiddle with colour finders in computer programs until you achieve the perfect hue.

Access to unlimited colour wasn’t always this easy, however. Rather than quickly finding an unusual colour on your smart phone or laptop, getting a rare colour centuries ago might’ve meant a trip to an isolated mineral deposit in a remote country. This was the case with lapis lazuli, a cave rock coveted for its brilliant blue hue, which was more valuable than real gold in Medieval times.

Pigments date all the way back to prehistoric times, but what we know about them and their role in the art world comes from Edward Forbes, historian and former director of the Fogg Art Museum at Harvard University from 1909 to 1944.

Also known as ‘the father of art conservation’ in America, Forbes was known for collecting pigments from across the world, primarily used to authenticate classical Italian paintings. His obsession quickly became a collection; after years of travel, the Forbes Pigment Collection grew to over 2,500 original specimens, each with its own origin, production, and strengths. 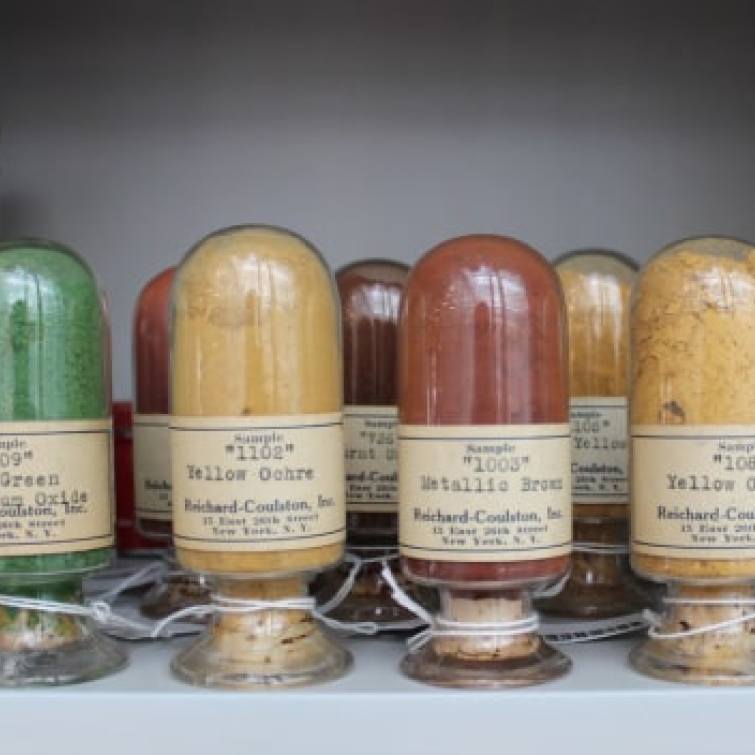 His collection of the rarest colours of his time has been preserved to this day, stored in Harvard’s libraries. They’re still used as well, mostly for scientific analysis to compare standard pigments with unknown ones.

Narayan Khandekar, the director of the Straus Center for Conservation and Technical Studies at the Harvard Art Museums, is the collection’s custodian now. For a decade, Khandekar has added to the collection, making it more relevant to modern times, giving him a better understanding of 20th century contemporary art.

And art has changed from the past. Instead of working with ‘colourmen’ – tradespeople of dyes and pigments – to acquire their medium, today’s colours are all commercialized.

“Artists today will use anything to get the idea that’s in their head into a physical form,” Khandekar says. “It could be pieces of plastic. It could be cans of food. It could be anything. We need to be able to identify lots of different materials that are industrially produced as well as things that are produced specifically for artists’ use.”

He describes his work as detective-like in how he goes about researching and cataloguing pigments.

“We use our instruments in the same way that forensic scientists do,” Khandekar adds. “We examine and find out what we can about the key compounds that will tell us the material’s origin.” 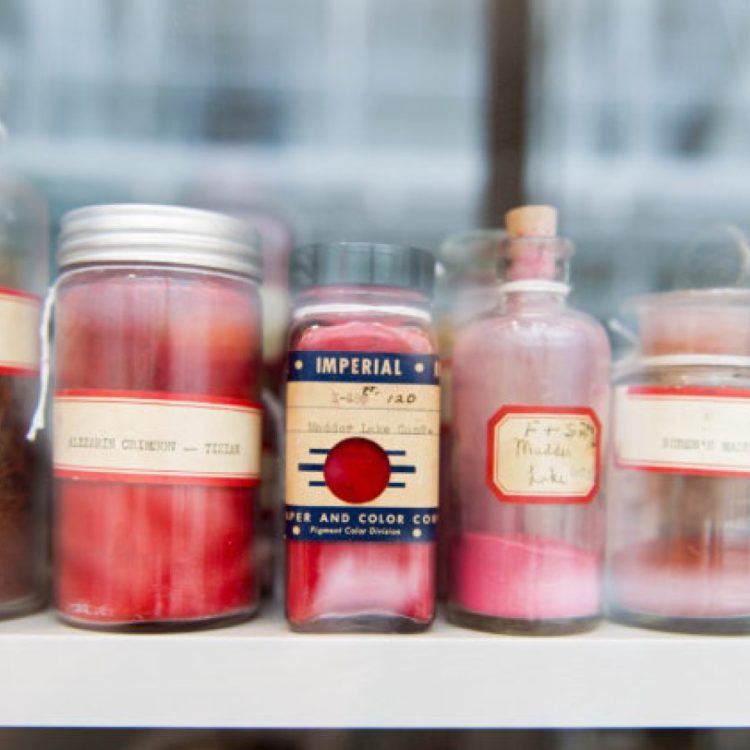 Instead of high-tech tools like DNA analysis, his team of conservation scientists utilize a colourful combination of techniques, including Raman spectroscopy, mass spectrometry, gas chromatography, and electron microscopy to map out precise chemical compositions of pigments.

His team seems to be doing something right, as they’ve made significant discoveries thanks to their unrivaled collection of now-unattainable pigments. In 2007, their work was critical in proving a Jackson Pollock painting that was ‘rediscovered’ was nothing more than a fake. Their pigment analysis revealed that a certain red colour used in the painting was manufactured 20 years after the artist’s death. That colour – Red 254 – was the result of a chemical reaction, first noted in 1974. Some are more familiar with its alias, ‘Ferrari red’.

“Every pigment has its own story,” says Khandekar. 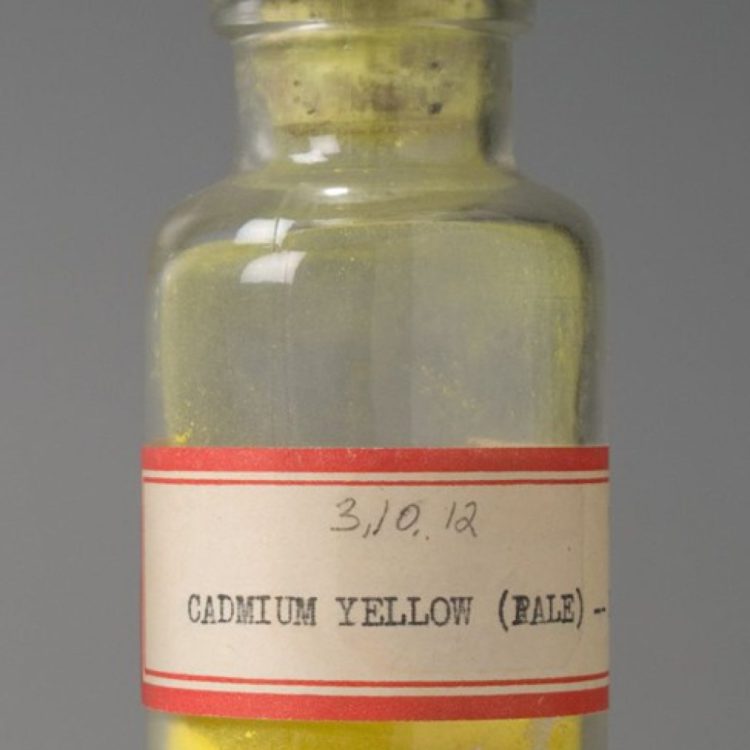 Cadmium Yellow
“Cadmium yellow was introduced in the mid 19th century. It’s a bright yellow that many impressionists used. Cadmium is a heavy metal, very toxic. In the early 20th century, cadmium red was introduced. You find these pigments used in industrial processes. Up until the 1970s, Lego bricks had cadmium pigment in them.”

Mummy Brown
“People would harvest mummies from Egypt and then extract the brown resin material that was on the wrappings around the bodies and turn that into a pigment. It’s a very bizarre kind of pigment, I’ve got to say, but it was very popular in the 18th and 19th centuries.”

Synthetic Ultramarine
“This was discovered in 1826 as the result of a contest. In a way it is like discovering how to make gold as artists no longer had to buy natural ultramarine at great cost.”

Cochineal
“This red dye comes from squashed beetles, and it’s used in cosmetics and food.”

Dragon’s Blood
“It has a great name, but it’s not from dragons. [The bright red pigment] is from the rattan palm.”

Thankfully, we don’t need to travel to Harvard’s libraries to access unique and extraordinary colours – our state-of-the-art digital printing technology can produce any colour imaginable!

For crisp, clean, and colourful copying and printing for your important documents or presentations, work with your local Print Three shop today!