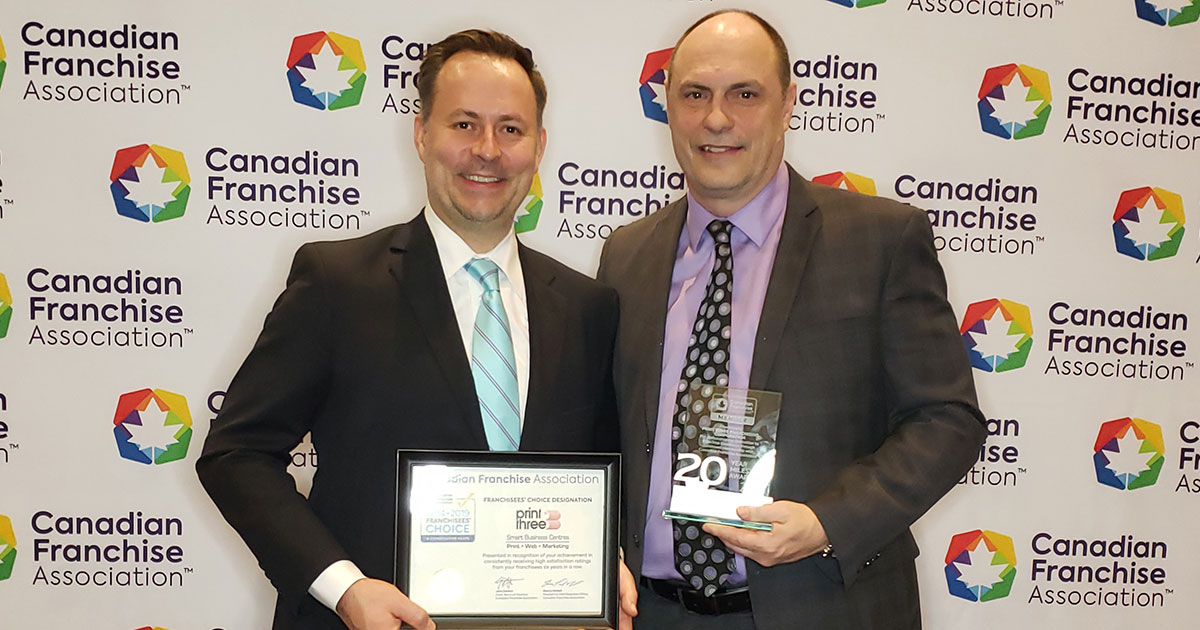 (Toronto, Ontario) April 23, 2019… Print Three Canada was honoured as a recipient of the Franchisees’ Choice designation on April 8, 2019 during an Awards Gala at the 2019 Canadian Franchise Association (CFA) National Convention in Niagara Falls, Ontario.

This is the ninth year for the annual Franchisees’ Choice designation program and Print Three Canada was recognized for its accomplishment in receiving the designation every year since 2011.

“This sixth consecutive CFA award is a testament to the relationships we’ve built with our family of franchisees, the value we provide to growing their business, and the ongoing improvements we make to the infrastructure of our franchisee network,” says Andrew Hrywnak, President of Print Three Canada. “We are proud of what we’ve built and the opportunities we continue to offer to Canadian franchisees coast-to-coast.”

Print Three is a Canadian leader in digital printing, marketing and web-to-print services for a range of businesses and corporate clients. With 50 locations across Canada, Print Three is one of Canada’s largest print networks.

About the Canadian Franchise Association

The Canadian Franchise Association (CFA) helps everyday Canadians realize the dream of building their own business. CFA advocates on issues that impact this dream on behalf of more than 700 corporate members and over 40,000 franchisees from many of Canada’s best-known and emerging franchise brands.

Beyond its role as the voice of the franchise industry, CFA strengthens and develops franchising by delivering best-practice education and creating rewarding connections between Canadians and the opportunities in franchising. Canadian franchises contribute over $100 billion per year to the Canadian economy and create jobs for more than 1.9 million people.